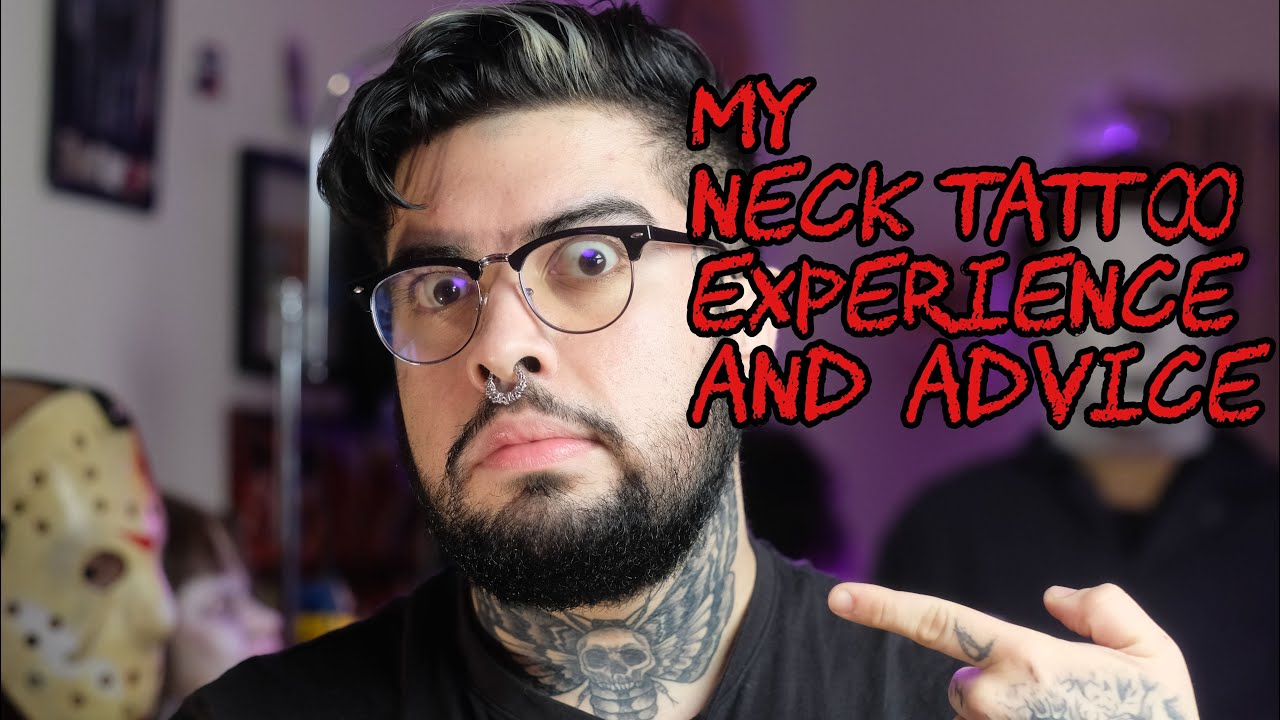 A neck tattoo can be a beautiful, delicate addition to your body art collection, but there are a few things you should know before making the decision. First, make sure you’re comfortable with the idea of getting a permanent piece of ink on your neck. Second, be sure to ask your artist about any potential risks associated with the procedure. Third, be prepared to commit to the ink for a long time—a neck tattoo is likely going to require multiple sessions to complete.

Here’s what Jay Bourdier has to say about his personal experience getting his neck tattoo.

Tattoo by Ricardo at www.eretattoo.com

[ Music ] What’s going on? I wanted to make kind of like a short video talking about my experience, uh getting my neck tattooed uh prior to doing it. I should have probably gone on youtube and looked at people’s experience just so I could have known what I was getting myself into with. That being said, everybody’s experience is probably different. It also depends on how intricate the piece is, who the artist is, if it’s full color or you know, there’s so much variables that go into it, but for me personally, it was extremely painful. It was the session lasted for about four to five hours.

I would say um, probably more because we took breaks, but i would say, like the the most painful part of the tattoo was definitely the sides here, we’re way more sensitive. The outline definitely wasn’t as bad as the shading and which is odd because the shading he used a rotary tool uh for anyone that knows, rotary machines are usually a bit more um gentle than uh coil machines. So I was actually surprised at how much uh pain. I actually experienced, I would say, from a scale of one through ten, the pain was like a eight to nine. It was really getting unbearable.

Uh to the point that at one point I felt like my body was going to go into shock with. That being said, the night before I didn’t get much sleep, so I’m pretty sure there were a lot more variables to why my experience was the way it was, but either way I did champ it out. Full tattoo is finished, definitely worth it. My artist Ricardo who’s based in Jersey did an amazing job. He did not use any numbing spray just because I wanted to like basically experience it fully.

He did use this bactine pain relieving cleansing spray, which I guess is kind of a numbing spray. I’m not really sure but uh after the tattoo, the aftercare that I took to was basically Aquaphor and this so being that it’s winter here in New York, New Jersey, you know you wear jackets and you wear like hoodies and you kind of don’t want nothing to Ever like rub against your tattoos directly, just because you don’t want anything to be infected or anything like that, and I have a cat and um. You know I go out constantly. I work in a city 40 hours a week, so I’m always out and about so for the first I would say three to four days. I used this bacteria max pain, relieving cleansing spray and I never had any like inflammation of the tattoo or nothing like that. So I definitely highly suggest that.

I also suggest getting a good night’s rest prior to the day of your session. Um. Definitely eating! Well, don’t overstuff yourself, obviously, because you’re also going to be put in a position if you’re getting a like front uh neck tattoo, you’re gonna, be put in a position where you’re gonna be laying on your back and your neck is gonna, be in A very uncomfortable way i was laying on my back and my head was basically tilted off of the table, so all my blood was rushing to the top of my head and I had tiny needles. Basically, it felt like i was being slowly decapitated by these tiny micro needles and my blood was all rushing to the top of my head.

So it’s kind of a a bit much to handle so yeah. I definitely recommend eating prior to it. Taking breaks I drink water stay hydrated. Obviously I definitely don’t recommend drinking booze uh alcohol, the night before just so, you can, like you, know, be fully there, but yeah. That’s pretty much my experience with getting a neck tattoo.

I don’t want to scare anyone from doing so. I just it’s kind of more of a like small disclaimer, like hey. If you get a neck tattoo, you should probably do this. Do that, but with everyone is different um. This is more so aimed towards people who are gonna get full fronts uh when it comes to sides or like the back, I’m not sure what that experience is like mine does stretch from about the bottom of the bottom of my ear middle of the bottom Of my ear to ear adam’s apple down to about my collarbone, the easiest part for me to handle was my adam’s apple.

For some reason it I didn’t feel much there. I’m not sure why but yeah, but, like I said, everybody’s experience is going to be different. My neck is a bit fatter than most people’s, I’m not sure. If that may help, but uh you know, that’s basically what I went through. I highly suggest getting a next hat.

I really love the way they look. They kind of like frame your face and it’s kind of like a contour effect in my opinion, and I’m just obsessed with tattoos, so I definitely recommend anyone go get a neck tattoo, but yeah. That’s pretty much my experience. Thanks for watching.