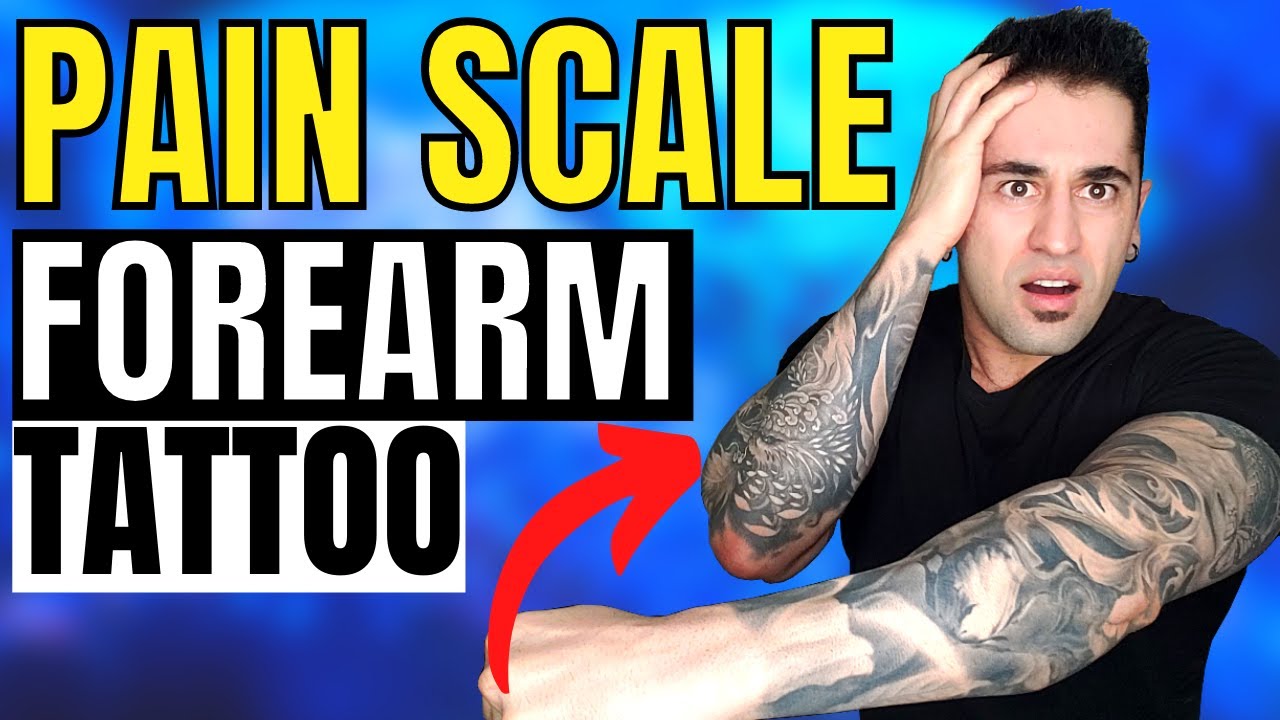 So chances are you’re thinking about getting a tattoo somewhere on your forearm, and you want to know how it feels. Well, that’s exactly what we’re going to talk about today, we’re going to go over my experience, getting my entire forearms blasted, and i’m also going to give you guys a pain scale ranging from one to ten one being there’s a little bit of sensation there and ten Being this, i never wan na get a tattoo ever again with that being said, tattoos are very addictive, so, even though you might feel a whole lot of pain somewhere in your body at some point, you’re gon na come back a few months down the line asking For more, that’s just how it goes so this is what we’re gon na go over today, the inner forearm, the outer forearm, the inner wrist outer wrist, the ditch and the elbow. Let’S start off with the inner part of the wrist. The inner part of the wrist was one of those areas where i actually felt it quite a bit. It didn’t really feel like a scratching or stinging kind of sensation.

It felt more like an intense burning feeling, like a very intense one. The reason why i felt so much was because there are a lot of nerves running in that area and also the skin on the inner part of the wrist is very thin, sensitive and soft. So once you factor all of those things together, it calls for a tougher situation. I would give it a 7 out of 10 in terms of rating, not the absolute worst feeling in the world, but at the same time it’s not a walk in the park. While i was getting tattooed, i was like hey i’m getting tattooed here and it’s not so pleasant.

Now, let’s move on higher in the inner forearm to about this area right here for the most part, getting tattooed here was a very pleasant experience. Now i say pleasant not because it was fun by any means, but because i wasn’t hurting in agony like another spot, i’m gon na mention later on a lot of other people. You talk to will tell you that getting your inner forearm tattooed isn’t so bad. The best way i could describe the feeling is it’s pretty much like getting your skin picked at by a toothpick lightly. Obviously, though, you’re still gon na feel it, but it’s one of the more beginner friendly spots to get tattooed on for the majority of people.

During that part, i just sat back and watched whatever show. I was watching on my cell phone without being too uncomfortable, so i would rate that inner forearm a 4 out of 10 Now i know i said that inner forearm was a pretty easy place to get tattooed, but once you get into that area right here, it gets pretty uncomfortable much like the inner wrist. It felt like a burning sensation, but what’s crazy is every time my artist will go over that spot? I would feel like there’s pins going inside me in different parts of my body. It’S the weirdest thing to say i know but imagine you’re getting tattooed here and all of a sudden.

You start feeling pins in your back chest or legs. It’S crazy, but that’s how i was feeling. So if you guys have a similar story, make sure to write it down, so i don’t look like a maniac overall, i would rate that spot 5 out of 10 because i was very uncomfortable getting tattooed there, the entire time, not the worst pain, not even that Bad of a pain, it’s just a very, very weird feeling, moving on, let’s get to the ditch. This is a super popular spot to get single tattoos on or if you’re going for a half sleeve, depending on where you want to stop it at you might just get half the ditch or you might get the full thing. I’M a great example of that.

We didn’t go high enough to cover the entire ditch. We only went as high as half of it and let me tell you this is one of those spots where i really felt it. I mean the entire time i’m just like. Let’S finish this up already, i just want to be done and mind you. We only did half of it, not because i couldn’t, but because you know it’s what the sleeve went up to you know much like the wrist.

The skin on that area is super thin. Even if you take your finger and graze it hard over it or you pinch that spot you’re, gon na feel some sort of irritation or some sort of pain more so than other spots. On your body i would rate the ditch a 7.5 to 8 out of 10 You’Ll get through it, but for me and the majority of people it hurts quite a bit quite a bit. Let’S move on to the outer wrist this one i felt wasn’t too bad by any means it was just irritating.

If anything, we got some solid black in there it felt like i was being picked out by a toothpick. I would say that this was one of the more manageable spots to get tattooed on. Obviously, if they go closer to that little tiny bone that everybody has on the wrist you’re going to feel the sensation slightly more, but nothing too crazy or even bad for that matter. Which is why i’m going to give the outer wrist a 4.5 out of 10 Moving on to the outer forearm area, for me this was the most the most tolerable place to get tattooed on the forearm, an absolute breeze very much like the inner forearm.

I was just chilling watching my show eating my snacks. Life is good. Life is golden. What more can you ask for, so i literally have it all in that area, thick lines, thin lines, shading white and i would rate the overall pain of the outer forearm, a 2.5 to 3 out of 10 Now, let’s move on to this spot right here, not quite the inside, not quite the outside.

The feeling that i got in that area was kind of a mix of a burning sensation and the feeling of getting pricked by a needle which kind of makes sense. Because that’s what was happening, the pain was manageable but irritating. At the same time, it felt more like a nuisance more than anything else, imagine yourself being a giant and you have all these little humans walking on you you’re, just like shoot like get the hell away from me. That’S what it felt like. I would rate the pain a four out of ten.

You feel it, but it’s nothing too crazy. All right! This brings us to my most painful spot to get tattooed the elbow. Oh, my god, this was absolutely brutal. I mean i immediately felt it and i’m like uh, i guess you’re tattooing, my elbow now right and he says no at this moment, i’m just going around it and i’m thinking to myself this guy’s going around it and it hurts the spat.

I can’t even imagine once we go on it anyways. I have a good portion of my elbow blacked out and i’m lying down and he’s going over it all of a sudden. My eyes just widened up and i’m like what the [ __ ] is that feeling for me it was the absolute worst pain i felt it felt like he had one of those construction worker jackhammers and just hammering away on my elbow just drilled to the bone. Wasn’T pretty and for the first time i was actually very close to being like hey man, give me a couple minutes: let your boy recuperate his body a little, but i didn’t end up doing that. I’M just like pk shut your mouth.

Let the man finish. Let him do his work, it’s going to be over very soon and what felt like hours, which was actually minutes. It was done, and over with, i would rate the elbows a 9.5 out of 10 and the reason why i wouldn’t put the elbows as a 10 is because i think, in my opinion, tens are only to be used if you tap out and since i managed To squeak by, i think 9.5 is justified, but overall the pain is up there as one of the worst things i’ve ever felt in my life.

I know people say the chest is pretty bad and spoiler alert. I’M getting my chest on right now and i can easily say that it does not compare to the elbows and that’s a little hint make sure you’re subscribed because believe me, you do not want to miss that chest. Tattoo vlog now at the end of the day, pain is relative and everyone experiences things differently. Some parts might hurt like crazy for me, but for you you might not even feel it that much and vice versa, also a lot of different factors go into tattoo paint. So if you want a deeper look into tattoo paint, explained then make sure to watch my video on that and the link is in the descriptions below make sure to subscribe for a lot more content like this press that, like button smash, it make love to it.

Whatever you want to do, I love you all so much. Thank you for watching and I’ll see you guys in the next one [ Music ].