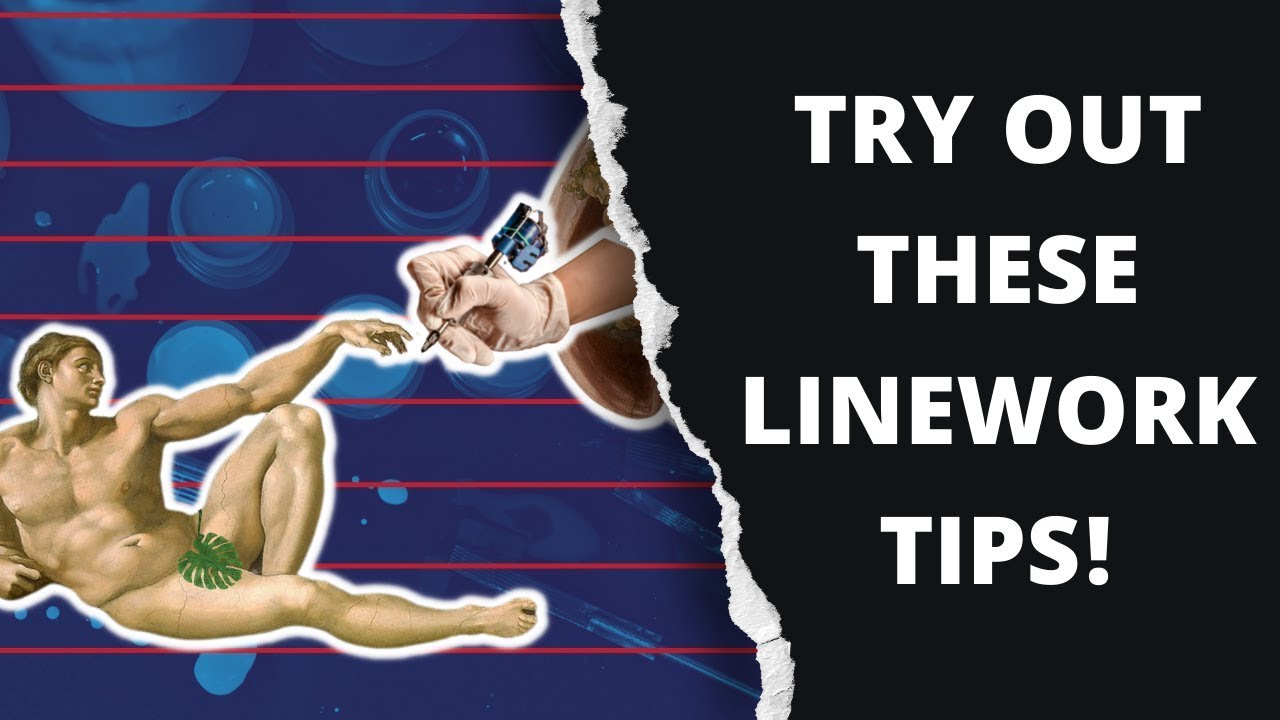 Having trouble with your line work? Here’s a video by Brandon from Tattooing 101 going over tips and tricks that all beginners should know to help improve their line work.

What’s up everybody? So you’re having issues with line work with your tattoos, right? This video is going to help you break down exactly what you need to do in order to kick up that line work. So be able to make super clean lines. Without you know the shakiness or things like that, this video is for you.

If you’re new to this channel, I’m Brandon from Tattooing101 and make sure you’re liking and subscribing down below and hit that little bell notification so you can keep up to date on all of the new videos we come out with each week. So let’s get into it.

The first one is going to be how you hold your machine. So, depending on the machine that you use either a pen style machine or a rotary style (like this Injecta) there’s going to be a few differences with this, but it usually stays about the same.

Whenever you’re holding your machine, you want to make sure you are putting your middle finger underneath the cartridge, obviously for the tattooing process, you’re going to be wearing gloves. It’s a little bit easier for you to see everything going on if I’m not wearing gloves, because they’re black and obviously it kind of blends into everything, but middle finger going underneath the actual cartridge or the tip of your tube not over where the needle is going, but right underneath if you’re using a traditional machine. So right like this.

Now, another thing is: if you’re trying to tattoo like this, you’re going to be super shaky, because you have no points of contact holding yourself so you’re just trying to you know if you’ve ever Tried to hold a book out for a long period of time, you know you’re going to get shaky. It’s just not going to work out. So you want to make sure you’re tucking your elbow against your side, and that leaves for a really really tight and comfortable position whenever you are tattooing. The other thing would be using this hand as stretching. If you are only focused on tattooing fake skins, still have your hand there. I usually don’t put my hand there in the actual videos, because my camera is obviously showing you what I’m doing so I usually have my hand kind of like using an anchor point in the background. But if you are tattooing fake skin still have your hand there so you can get used to how everything works together.

Another thing would be making sure that you’re doing the appropriate things for practice. If you’re having issues with your needle depth, you want to focus on these two fingers whenever you are gliding across. This is your depth control right here, so when you’re holding your machine, you know you can either tuck them in or hold them out to the side, and that is how you control your actual depth when it comes to tattooing. I like to kind of tuck mine in like this, so I know exactly how I hold my fingers every single time is going to help me understand that I’m going into the skin about one to two millimeters, depending on where it is on the body.

One of the biggest demons when it comes to the tattooing world would be the nautical star just because they’re all perfectly straight lines. If you mess up one line, there is absolutely no going back you’re clearly going to be able to see that it was a mess up, so even focusing on trying to tattoo those perfectly are going to help you out a ton. That was actually the tattoo that I had to prove that I could do in order to go through my apprenticeship. That was my final tattoo that I did as an apprentice before going on to an actual tattoo artist. So that is how hard they actually are to make absolutely perfect.

So what I mean by using your stretching hand. This is exactly what I mean, so if you are tattooing on fake skins, you can even hold your fake skin how you would an actual human being. So you know having your hand right here, stretching the skin out and then just going over all the little lines right like that, and I’m holding my machine with my middle finger underneath that cartridge right like that, these fingers right here, my depth control. That’s why I like to dip my pinky into the Vaseline, to put it on this hand, right like that, because I have my pinky with that vaseline, so it helps it glide a little bit over the actual skin or fake skin, whatever you are doing. So that’s a little trick I’ve learned throughout the years. It kind of helps out when I’m pulling like really long lines to just have a little vaseline on those fingers. But you don’t want to get them on these ones because obviously you’re using them to hold your machine.

Okay, so let’s go through a couple lines of this fake skin so you can get an idea of how I hold my machine and how it all works together.

For this tattoo, I’ using a 14 round liner, it’s a really big one because it is traditional. So I was putting vaseline down in this angle.

You could clearly see how I hold my hand, so it’s kind of muscle memory for me. Usually I’m having to move my hand around, because my camera is usually on this side: [, Music ].

it just helps out a lot being able to get into the skin correctly [ Music ].

So this is what you’re going to be focusing on right here. Just holding your machine like this, using this finger as your depth, control and just getting comfortable tucking in your actual arm to your body. So everything can be super nice and tight when it comes to like your tattooing, and you won’t have issues with like super shaky lines or anything like that. You know if I try to not have my hand on the table and just try to hover over and tattoo, obviously it’s not going to work out, so this is how you should be practicing tattooing having all these things set up correctly, so you won’t have any issues with you know shaky lines.

Another thing when it comes to your line work. The other major problem is your depth, so going too deep or too light, and the fake skins will make you know really really thick or even cuts in the fake skins. We’re going too light. It just won’t even show up at all or just really lightly, like it’s scratched in.

And then the last thing you’re going to want to focus on will be your angle. So, with this cartridge it’s a bigger liner. So I’m not making the normal angle, which is about right like this, you know I’m going up a little bit more just because it’s a bigger liner and it just goes into the skin more efficiently whenever you are doing it with a bigger liner and also there’s A ton of needles, so not all of the needles, will go into the skin and hit the second layer if you’re doing at a big angle. But if you’re using nine sevens things like that, you want to make sure that your angle is about right like that and then go through all of your line. Work with that same angle, the whole way through and before long your line work will be perfect.

I hope this video was able to help you out and if you have any other questions, just comment down below and I’ll look through them and if your question is good enough, I might just make a video explaining exactly how to fix your issue.

As always, thank you guys for watching and like and subscribe down below, so you can keep up to date on all the new content we make and you guys have a wonderful day.